Download PES 2016 Special Edition Libertadores v1.5 - I returned again to update the game Football. This time it is a PSP game on Android. PES 2016 Special Edition: v1.5 Libertadores, and a Patch by PES Libertadores. You need to know if this PES specialist clubs Latin America, which means there is no European league teams in this PES. The teams in the European Champions League but the player and his awesome Jersey, Just Logo are correct. Immediately, play for those who want to try. 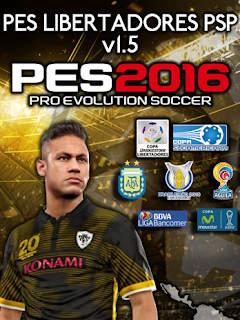 Do you like the clubs from Latin American countries such as Argentina, Brazil, Peru, Colombia, Mexico, and others? Perhaps this PES your search. PES2016 Special Edition or special Libertadores South American club [Latin]. The language used is Spanish both on the commentator or the text of his game.